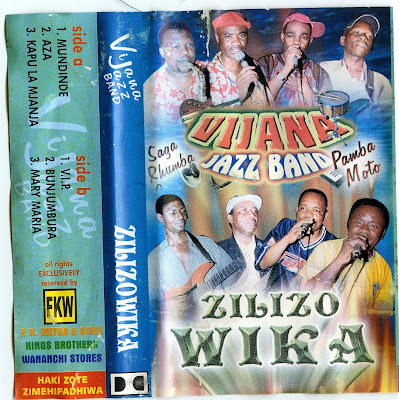 Thanks Todd. In East Africa, Vijana Jazz became a household name with "Niliruka Ukuta" ("I jumped over a wall"), in which the narrator tells the story of his love affair with a woman who didn't reveal her true marital status. He ended up having to jump over a wall to save his life when the woman's husband nearly caught them "in flagrante delicto" at Midnight.
I'm sure there are many readers from East and Central Africa who are grabbing this music but not writing comments.
"Bandeko ya basi na mibali, ebongi tolobana."
"Ndugu na dada inafaa tuongee."
("Brothers and sisters, let's speak to each other.")

Many thanks for this and all of these recent posts. Your hard work is appreciated.

Excellent stuff, many thanks for posting. Apurva, from Pune/India.

Great stuff. Thanks.
I like the new look, btw.

Wow - Thanks for all of these! I just caught your comment (on a year-old post!) at my blog, and I've added you to my blog-roll.

Thanks for sharing Vijana Jazz Band and Tabora Jazz Band too. I appreciate very much. Oh, do you have Amba Baharia, Kaka Said, Mzee Tupatupa and Sifa za Stella by Vijana Jazz? Thanks.

Thanks for your unselfishness!

You can't believe how you brought back my fondest memories!

...I wish I'd turn back the clock but when it's gone, it's really gone!

In the song "Unikubalie", I could hear Cosmas Chidumule (now a born again!)singing fascinatingly. You can't believe a few decades past since this song came out but it looks like yesterday!
______________
Jua Kali