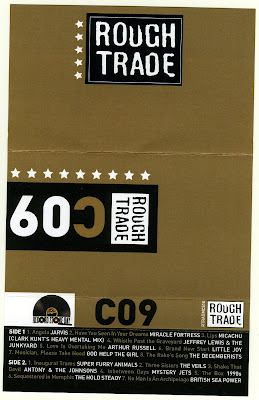 Rough Trade just put out a new limited edition cassette in the vein of other NME cassettes such as C86 from back in the day. So even though almost all the tracks have been widely blogged (check hypem.com) I simply had to cover it (considering all the similar cassettes that I've put up here) and Rough Trade had sent me a copy, and I like them :). The only track that appears to fairly exclusive is the Clark Kunt's remix of Micachu. In the end I couldn't extract a recording of the cassette that was quality enough (even though sometimes, such a with the african cassettes, the tapes sound fantastic) so I compiled the mp3s from other blogs.

All in all, the music on here is really good. My favorite track has to be (hands down) the Cure cover by the Mystery Jets. Such a good track. I dj'd with Will and Kai from the Mystery Jets in Ghent last weekend and they played a fantastic banging set (with excellent mixing skills). Will is going to come down and dj with me downstairs at Catch this Thursday at 22 Kingsland Road in Shoreditch. It's free if you want to come along.

[edit: I've put the Micachu track up now cause it's exclusive to this blog and this cassette]

A1 Jarvis - Angela
A2 Miracle Fortress - Have You Seen In Your Dreams
A3 Micachu - Lips (Clark Kunt's Heavy Mental Mix)
A4 Jeffrey Lewis & The Junkyard - Whistle Past The Graveyard
A5 Arthur Russell - Love Is Overtaking Me
A6 Little Joy - Brand New Start
A7 God Help The Girl - Musician, Please Take Heed
A8 The Decemberists - The Rake's Song

B1 Super Furry Animals - Inaugural Trams
B2 The Veils - Three Sisters
B3 Antony & The Johnsons - Shake That Devil
B4 Mystery Jets - In Between Days
B5 1990s - The Box
B6 The Hold Steady - Sequestered In Memphis
B7 British Sea Power - No Man Is An Archipelago
Posted by dalston shopper at 11:33 pm 2 comments:

djng this week in Nottingham and Ghent, Belgium

I'm so lame that I've been so busy to actually post music, which is too bad.  Last weekend at the Land of Kings festival, Lou & Nova rocked it out, as did Rory Phillips and super special guest Disco 3000 (Erol Alkan).  I got lucky to play just before Erol so I tried to lay down a disco set. It was amazing to play for that kind of crowd and play whatever I wanted, which happened to be mostly new synth disco.

Anyway, tomorrow I'm playing for the Liar's Club 6th Birthday.   All around the lineup is fantastic, but I want to give a special mention to Maria & the Mirrors which is actually one of my favorite live acts right now.  I can't explain it other than I feel like they could have stepped out of Warhol's factory.  Read about them on my previous review here. 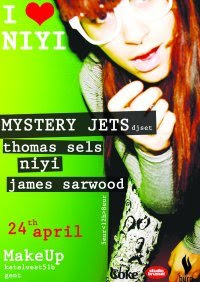 I'm also djing on Friday night, the 24th at the Make Up club for I Heart Niyi's party in Ghent, Belgium.  More details on the party's facebook page.
Luckily for both parties I've been told that anything goes.  It so happens that I'm crazy about this track right now.  I just kind of works, especially if you listen for a while.  I think one of the reasons I love Empire of the Sun so much is their very excellent production.  I think the songwriting is just very well done, but the production is out of this world.  I like this other track by Dream Academy, which is quite similar, which might also seem quite naff, just because the production is excellent.
Empire of the Sun - We Are the People (cagedbaby remix)
Dream Academy - Love Parade
Posted by dalston shopper at 9:07 pm 2 comments:

Land of Kings Festival in Dalston this Thursday and Friday 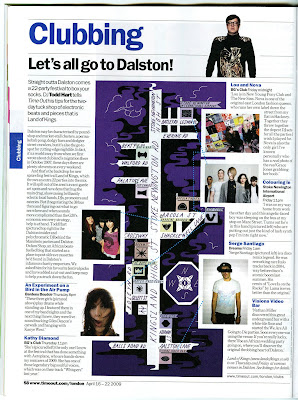 I'm behind on my posts here cause I have a great idea but it's taking me a while to post it. I'm going to post a mix I've made of new music that I'm crazy about before I go back to posting some more cassettes.
In the meantime, come to the Land of Kings festival this Thursday and Friday, the 16th and 17th of April. I'm djing on Friday night with Lou and Nova and Rory from Trash/Durrr along with a special secret guest who can't put up with Disco from our millenium so he has to go for the year 3000 (yeah!). We're playing at the Stone Cave from 11 pm (111 Kingsland High Street). It's a freaky cave restaurant so should be good. Also playing at the festival are An Experiment on a Bird in the Air Pump, David E. Sugar, Serge Santiago, Colouring In, Kathy Diamond, Allez Allez and many more. It's cheap and you can get tix on the day. You've come a long way baby Dalston! You can read more about it by clicking on the picture above which is my first full page article in Timeout.
Posted by dalston shopper at 11:51 pm 5 comments: