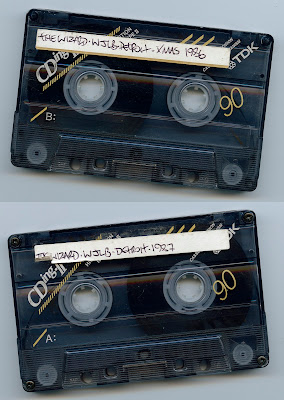 These are original dj sets from Jeff Mills aka The Wizard on WJLB radio in Chicago from 1986-87.   These are more of the tapes I got from Chris Low. This is mostly hip hop although now and then some early house slips in.  The crazy thing is that Jeff Mills really adds a lot to the mix as many of the tracks are scratched and mixed into completely new tracks and often sped up significantly.  All around a very enjoyable listen to see a real dj artist at work.

At some point in Side 1 it appears that we join radio station WHPK which apparently was one of the first stations to broadcast rap in Chicago.  Included in that segment are two live raps identified as Legend of Doom and DJ Quickhand.  I've posted  few separate tracks below that are included in the shows that are rarer and the live shows.

Side 2 includes the following tracks.  I managed to find the fantastic Nude Photo track on the Boards of Electronica site here.  Particularly great is the Prince - Kiss live remix clip.