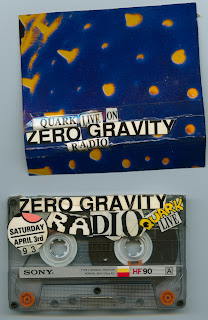 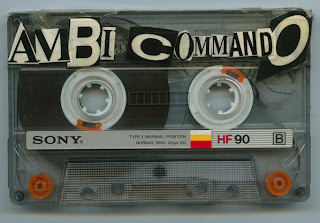 This blog has always been about trying to pull music that you either don't know or have forgotten about off of old tapes - sometimes with a sense of humor but often unearthing things that are amazing.  I think that's what gives the blog an edge - the feeling that you're finding treasure here that you can't find anywhere else, and someone has actually done work to bring it back to life for you.

I recently was given some more tapes of the collection of friends of DJ Quark who I've previously featured.  This one was done for a radio station called Zero Gravity in 1993.  Obviously it was a radio station that required a certain degree of cannabis-ness to function.  But dj Quark has a real talent for mixing in tracks and layering beats in a way that, as my friend Yasmin says, tells a story.  Have a listen and see what you think.  Most of the mix does not feature individual tracks but woven throughout the story are featured at least the following tracks.

Both of the above tracks are from the Black Dog Productions album Bytes.  Black Dog later becaome Plaid and were on Warp.

Colourbox - Baby I Love You So

Colourbox were an English due of brothers and were on 4AD label - the same as This Mortal Coil.  They also were sort of a precursor to the much later work by Rhythm & Sound such as the 2003 album I used to listen to with Jah Rule.

This mix also features 2 tracks from The Grid. The other is one is mixed by the Orb called Crystal Clear (the Crystal Clear Water Revival mix).

I've also lately been buying some more gear for my home studio.  I got a Korg M1 for not a bad price and excellent for producing original piano house sounds.  I am increasingly working on more of my own music and remixes and I'm always a sucker for interesting pro studio equipment.  I'm on the lookout for a good drum machine right now.  I discovered there are actually not very many actual shops you can go to and try things out in the Uk these days, at least not in London.  There are only the limited selections on Denmark street.  For this reason I wanted to draw your attention to this new pro audio resource I discovered called Sounds Great Music in Cheshire.  You may want to check out their Voodoo Lab effects.


Posted by dalston shopper at 10:23 pm No comments: