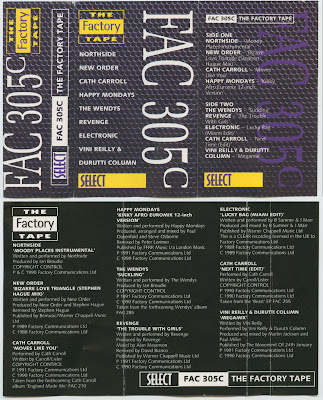 This is a rare compilation put out by Select magazine (other tapes of which I've featured on the blog) which features various singles from the Factory Records collection.  Factory Records were famous for people like New Order and Happy Mondays and have had a movie made about them.

The track on here which appears to not feature anywhere else is the Stephen Hague remix of New Order.  Stephen Hague was an american producer who gave a more 80s disco/synthop tinge to a lot of big tracks from people like the Pet Shop Boys.  Later he went on to work with Ace of Base.

When I first was researching this tape I was a bit surprised that there was an actual group called "Electronic" and I wondered how they could get away with that.  Then I realized it was probably some late 80s concept by these really heavy hitters,  Bernard Sumner of New Order and Johnny Marr of the Smiths.  If some random guy like me had put together a group called "Electronic" people would have scoffed.  But in the 80s big guys like these could pull it off.

This tape is on Discogs here.