Viola Valentino. Don't know much about her other than that she falls into the vast category of music made in Italy at a time when this kind of hair and makeup (not to mention music) was not shameful. Still, there is something about this tune which I enjoy, and that defines me as a man who's threshold of shame/cheese is very low. I appear to have discovered the motherload of Italian gay disco cheese with this track (lots more to download here). Apparently she was married to some guy who was the lead singer of the beloved Italian band Pooh (presumably not as in "Winnie the") when she did the movie Delitto sull'autostrada. It's all part of the wide world of music we love.

Here she is performing the song:

Fortunately, the Dalston Oxfam tape bins also give up good quality stuff. Here are some selections from a tape of Indian film music from the 50's and early 60's. Ironically, I selected the tracks I wanted to record and only realized afterwards that all the tracks I liked had Lata Mangeshkar (लता मंगेशकर) in them, or her sister Asha Bhosle.

I really don't know much about Indian film music of that time but apparently Lata is a super star, having in 1974 secured the Guiness Book of World Records award for most songs sung and also receiving in 2007 a Knight of the Legion d'honneur award in France. She really does have a beautiful voice and I'm sure the comments will enlighten me much more about her. 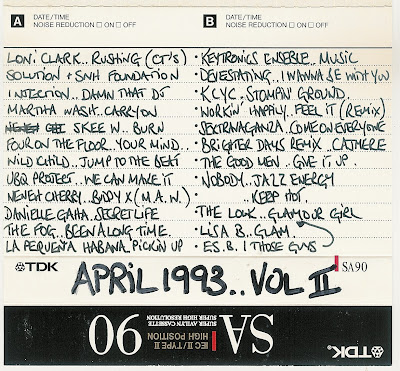