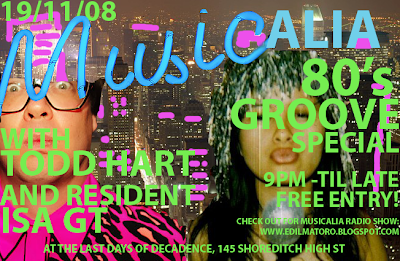 Key kids. I don't normally talk about every dj gig I do on the blog here, but tomorrow night (that's Wednesday 19 November) I'm doing a special set of 80's groove music at ISA GT's party Musicalia. It's free and in the middle of Shoreditch at a venue with a great sound system - and you need a great sound system for 80's groove. In case you don't know, 80s groove is pretty much the only sound that is just not getting played out much these days. People will play all kinds of indie rock, electro/techno/house, even disco and sometimes hip hop or old school stuff. But I almost never hear the stuff like below. But I love this stuff and you need to check it out. I have a huge collection of it. 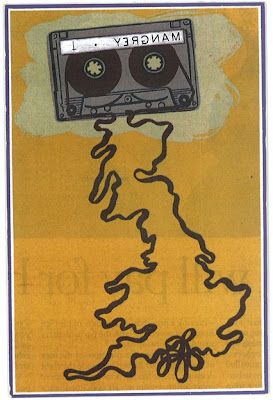 Mangrey is one of those kind of guys that, if you see him at a cocktail party, you will just feel you need to find out who he is. But I don't want to give you a visual image of what he is like, striking as that is, because I want you to imagine him. Someone I met at an east london fashion studio, not too young, not too old, but who you can know only through these tapes.

I first met him at a party at the Boudicca fashion label's studio and was told that he did magical mixtapes. And when I first started doing this blog I thought I would be posting lots of nuggets of personal confession, mixtapes done with a lover in mind or a theme, a slice in time perhaps. Unfortunately the Oxfam shops have a policy not to sell privately made mixtapes, so I've been mostly posting commercial releases.

Mangray had made a bunch of themed mixtapes for Zowie and Brian of Boudicca and they lent a few to me. Then I got to know Mangray's lovely personality myself and he offered to lend me copies of the original artwork for the tapes.

Maybe some day you will met Mangray. If you do, ask him what the mixtape theme of the day is. In the meantime, listen and enjoy. 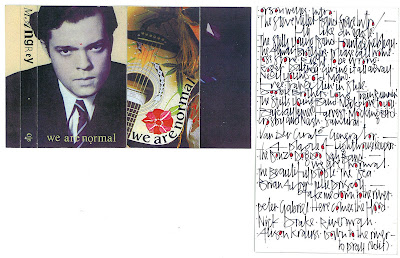 tracklisting - Side 2:
Van der Graaf Generator - A Plague of Lighthousekeepers
The Bonzo Dog Doo-Dah Band - We Are Normal
The Beautiful People - The Sea
Brain Auger and Julie Driscoll - Take Me Down to the River
Peter Gabriel - Here Comes the Hood
Nick Drake - Riverman
Alison Krauss - Down to the River to Pray (edit) 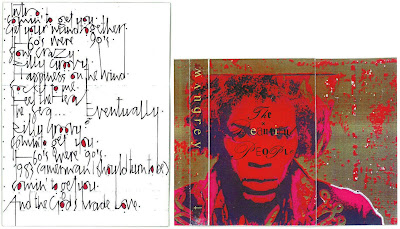 Mangray also gave me a Beautiful People cassette, but I prefer not to post complete cassettes that have been posted elsewhere. Still the artwork he did is amazing (above) and the music is really great (I didn't know them) - early 90s sort of loopy/synthy kind of dancey trippy stuff, with Hendrix samples. Check it out here. I also have one more with amazing music on it but I'm waiting for artwork from Mangray.

I encourage you to check out Boudicca if you are not familiar with them. As Showstudio says, Boudicca is the thinking woman's favorite label. Yeah, and their clothes fit. Seriously, they have brilliant ideas and are really nice people, but more than anything, their clothes fit really well and are really well made. I love clothes and I've discovered that the magic to an amazing designer whose reputation lasts is that their stuff fits really well. I've seen their stuff transform more than one woman trying things on in their studio. Amazing. Also, check out their Wode perfume they've just made. It's not that expensive and does this amazing thing that when you spray it on, it's blue, like paint, and then within about 20 seconds it fades completely. So you can spray it on a really expensive piece of clothing and freak the person out that you've just ruined their outfit, only to discover while they're getting mad at you that it's all gone and they're left smelling all spicy and wonderful. Class gift for christmas. I already bought some. Check out one of their catwalk shows I like here.

djing at Timeout gig with Drums of Death 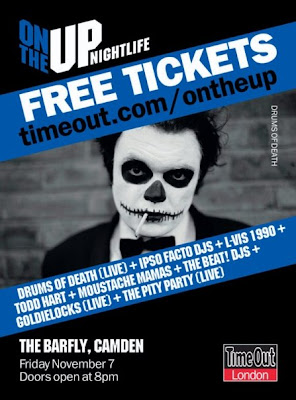 I have been invited by Timeout to join them in this new series of On The Up parties they are doing. This one features a number of up and coming artists which are really good and in particular Drums of Death is getting a lot of great hype. He played last nigh at Durrr and word is that the live gig is amazing and it's hard to capture the show in the tracks of his you can download. Anyway, his tracks are stand out. Check out his latest release Dodf**ksupanescorttune on the Keytars and Violins blog here and his remix of Late of the Pier's Bathroom Gurgle (one of last year's biggest tracks) on Discobelle. He is up for awards as breakthrough producer of the year at Dj Mag and you can tell by the diversity of these two tracks (the first is like an 80s groove remix and the second is bassline) that he is a new one to watch.

I am also a big fan of Ipso Facto and they are sure to draw a great crowd and looking forward to hearing their dj choices. I am playing the late set so you can be sure it will be just like all my freaky sets at Catch and elswhere - lots of tunes meant to first make you go "What the F*"£*K?" and then go "Uh Oh, my knees feel weak".

More details on the party and tickets here.
Posted by dalston shopper at 12:28 pm 1 comment: