Personal Compilation from Marseille - Boom No. 12 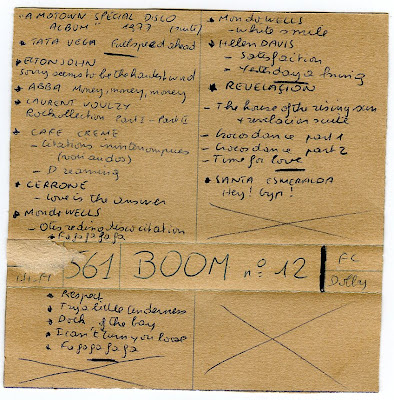 A friend of my girlfriend's parents who lives in Marseille is a musician and put all of his music collection from the 60s and 70s into cassette compilations. Last year he decided to get rid of the cassettes and so I inherited them. Lots of them are cassettes full of Led Zeppelin and french pop from the 60s like Francoise Hardy and Michel Polnareff but there are a few compilations of rare disco and other 80s rarities that are quites something.

I am not sure in what kind of world you would consider it a good idea to do a 10 minute disco cover of almost every Beatles song, but that is what Cafe Creme felt like doing. When you combine that with the Rockollections by Laurent Voulzy who mixes a modestly ok french sentimental ballade from the early 70s with occasional dips into famous english pop rock hits like the Beach Boys (check the vid), and the Otis Redding disco cover by Mondo Wells, this is undoubtedly the CHEEEESIEST painful post I have yet put on this blog. But fortunately the Cerrone track "Love is the Answer" and the Elton track, and in particular the Mondo Wells on Side B, redeem it somewhat. I never realized that Elton did so many great tracks in the early 70s and did a Greatest Hits album already IN 1974!

2 – Elton John - Sorry Seems to Be the Hardest Word

Side B is a bit better because it features the very first single from Mondo Wells from '77. Rare-ness - featuring the best track on this cassette, White Smile, with a bit of an african/reggae disco. And Revelacion's 16 minute disco cover of House of the Rising Sun, which is a very famous old folk song which actually was first recorded in 1993, is also quite special because it was written and produced by Cerrone (see his track on Side A) and Don Ray, two of the best disco French disco artists who did a number of hits, including Supernature and the amazing album Garden of Love. Revelacion is not the most amazing work they did, but a lot rarer and still quite fun.

(here is the cover of the Mondo Wells 7 inch)

(here is the cover of the Revelacion album below)

3 amazing musical groups have albums coming out - Buraka Som Sistema (sort of kuduro-ish which I have been banging on about for a while, as here), The Long Blondes and Mystery Jets. The Long Blondes and Mystery Jets albums have been produced by my version of musical God, Mr. Erol Alkan (read about Mystery Jets album in Drowned in Sound here). Erol is one of the few musicans who I really really admire because he seems to have a talent which I cannot even imagine. This is the essence of a hero, someone who can do something which you cannot even imagine doing even if you put in a LOT of hard work. Also, Mystery Jets have some really nice guys who have become friends and I have been a fan of The Long Blondes for their amazing tracks in the past. For this reason I am very excited about these albums. You can listen to tracks on their myspace or have a listen to my favorite track from each artist here:

The Mystery Jets - Veiled in Grey (on their myspace)

They all have gigs coming up, but Buraka Som Sistems is playing this evening (19 March) at Hoxton Bar and Grill in London, DJ/MC set at Yo Yo at Notting Hill Arts Club on 20 March and at Fabric live performing Friday 21 March. They will make you dance.

And Mystery Jets are playing at Durrr on Monday 24 March.
Posted by dalston shopper at 12:21 pm No comments: 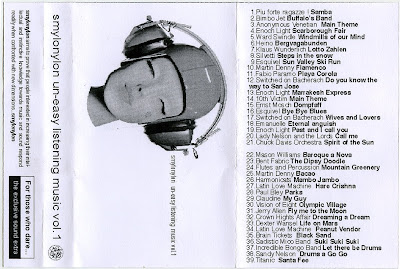 I feel so lucky. Friday a week ago I was djing for the first time at Fabric and Alex Gloor and Sasha Crnobrnja of In Flagranti came by and hung out for a while behind the dj booth and had a nice chat. Alex Gloor did the Smylonylon tapes which I've posted here before and he gave me this very first tape of them all! In Flagranti were playing live on the same night and are a hot item right now, which has a lot to do with their fantastic music knowledge, as evidenced by the Smylonylon tapes. You can listen and buy their new release Grand Central Shuttle here.

The early Smylonylon were more exotica/easy listening, so don't expect the dancey/droney mid 80s rare german disco that you can find on some of the later tapes. Still the stuff on here is in a league of its own and very hard to find. I discovered some of the tracks on this amazing Weils.nl blog which has rare 80's stuff, soundtracks, live shows of Siouxsie and the Banshees and more. It's truly an amazing blog.

Also - check my new blog for new music every day. Derfreshcreamy
Smylonylon No. 1 - Side A

Switched on Bacharach - Wives and Lovers

Below are some tracks from this mix. I couldn't find Suki Suki Suki from the Sadistic Mika Band, but I found this great track Picnic Boogie. And the Incredible Bongo Band track Let There Be Drums is from the same band that did Apache, which is well known as one of the most sampled of early hip hop songs and very heavily used in drum and bass (you'd recognize it). Of course the Dexter Wansel and Crown Heights Affairs tracks are famous and you should get them if you don't know them.

Bishi is someone who I have know for a while as she has been on the London scene doing some of the hippest parties (I first met her at Kashpoint, which coincidentally will always have a special place in my heart as I met my girlfriend there). Now she's flying on her own, has learned to play the Sitar very well and is in general a very sweet person. So I think she needs a little props up as she is doing something niche - writing and performing pop songs with a Sitar, so she certainly has a hook to her appeal. The song she sent me here is quite catchy and she wrote it with Matthew Glamorre, another very sweet and very creative person (responsible for the above mentioned Kashpoint). I think she really has some potential though I have told her I think the tracks need to be remixed or have more of an edgy dance sound to them (where are the odd 90s beats and other dance sounds from Kashpoint?). Any way - still a great track.

Bishi - On My Own Again
Posted by dalston shopper at 3:25 pm 7 comments: