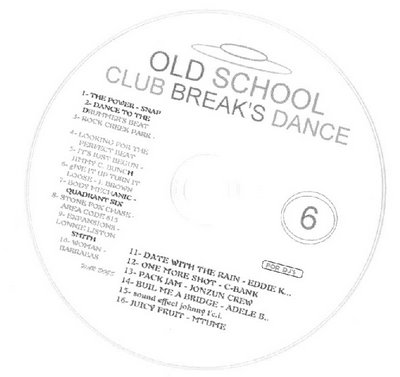 One of the things I love about New York is the number of people who are hustlin mix tapes on the street. There used to be a guy who operated on the corner of St. Mark's and Astor place that would have mixtapes of virtually every genre you know. And the music would often be really rare stuff from back in the day because the tapes were made by older djs from Brooklyn who were actually from back in the day but lookin for a little extra cash. Somehow I don't see people doing that kind of thing in London, where I live. Don't know why. Maybe it's the New York legacy of hip hop where part of the art form is putting out mixtapes.

So the tracks I've listed here are taken from a mix cd bought from a lady selling a variety of things on a picnic table in front of the Ricky's makeup shop on Broadway in Soho. Some good old electro/breakdance stuff here. And now that I'm back in London we will have some proper tapes from the Dalston Oxfam shop posted here shortly.

For a full track listing see the photo of the cd above. E-mail me to request any of the other tracks you really badly want (but don't just ask for all of them :)).

1 - Snap - The Power
4 - Afrika Bambaataa & Soulsonic Force - Looking For The Perfect Beat
12 - C-Bank - One More Shot
14 - Adele Bertei - Build Me A Bridge
(Trivia is that Adele Bertei was German and was the keyboardist for the Contortions, for all you no wave fans, but this is supposed to have been produced by Thomas Dolby and is a "seminal house track" according to Discogs.)

Head over and get this amazing Alhaji K. Frimpong African track from Awesome Tapes From Africa blog. It's got like an old school dancehall beat with vintage organ on it. Dope.

Also, here's a prince extended edit of Sexy Dancer which I promised. 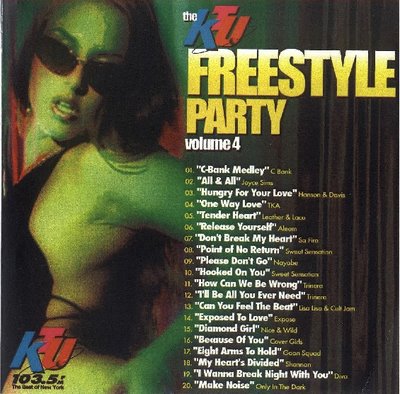 So I am travelling in NY and have been too busy to record any cassettes though I have found some treats that I hope to post shortly. In the meantime, I found a fantastic freestyle mix in a little shop on the Lower East Side which I am posting a few tracks from. It looks like this cd has not been released because I can't find any detail on the Internet. A lot of these tracks are new to me and feel free to leave comments suggesting other tracks like this that are good, as I'm loving this.

Also, I think that some of the track names are wrong, because as far as I can tell, only Expose did Point of No Return, not Sweet Sensation. Lots of interesting detail on groups from this era like this here.

E-mail me if you want any other tracks from this album.

Also, Rock Insider has an amazing playlist of indie rock I don't know with a bunch of catchy tunes and a Klaxons that I have not seen.

And what more do you want in a blog than a collection of fantastic band performances from the early 80's in Germany. Somehow that just seems cooler than anything else. Not Rock On rocks on.

Once again, the Dalson Oxfam Shop yields some early 90s dance. It's a bit commercial and I didn't separate the tracks out this time because it's a mix, but still some fun tunes on here. The sound is maybe a bit too recent to be fully coming back yet (1994) and definitely not as chin stroking as the techno from last week, but if this blog is about anything, it's about posting stuff that's close to the cheese line.

You know that if you were on vacation in some dark dodgy beach resort in Sicily with some friends on about 3 pints and this came on, you would be thanking allah. According to this website Digital Boy was a pioneer in the Italian techno scene. I am not familiar with him and can't find much more info about what he's up to know. Leave me a comment if you know. He was very prolific it seems.

I am not only going to post early 90s dance stuff on here, it's just that of the stuff found at the Oxfam, it has been the most interesting so far.