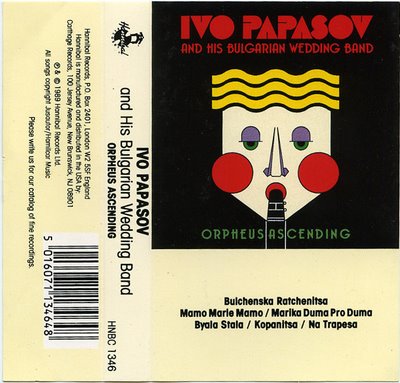 Ivo Papasov supposedly goes around playing up to three real weddings a week. And he is supposedly the most famous Bulgarian musician as a result.

I have been intrigued by Bulgaria for some time now. My interest in jumpy quick bouncy music, such as klezmer music and gypsy fun and related ska and indie stuff has been growing over the last few years (trust me to always follow new bandwagons slavishly). I found this cassette in the bin and had to record it because we also have the vinyl at home and have been listening to it for years now. Unfortunately, this Ivo Papasov tape is not really that bouncy, but it is beautiful. And because Bulgaria is the land of "roses and yoghurt", has cheap snow ski resorts, black sea beaches, lots of hilarious eastern european people and real estate cheap enough for London artists to invest in, it's on the top of our list for vacation spots.

I decided to try to find some more bulgarian music links but most were of this flavor and even I have limits.

I did discover a few amusing recordings from Radio Bulgaria on this shortwavemusic blog. This guy records radio broadcasts on his scratchy shortwave radio from places such as Cairo and elsewhere. Another great example of what the Internet does for us. I hear the Internet's catching on big these days?

Radio Bulgaria does have a slick website with some streaming music programs. I managed to find this mp3 and this mp3 of a program with some lovely folk/gypsy stuff on it. Bulgarian choral type singing does also make an acceptable mix with electronica-ish Transglobal Underground stuff (warning, these songs have a bit of a drum and bass feel at the end).

You may also want to head over to Undomondo and pick up these beautiful klezmer tracks from The Cracow Klezmer Band and the Klezmeyers.

Unfortunately, this video is a bit slow, but it is a bulgarian wedding thing.

I've been too busy to record a new tape so in the meantime I'm going to post this cd. I really love this sound. Particularly good, in my opinion, are RTZ - Dance Your Ass Off, Apotheosis - O Fortuna, and Tekno Tekno - Beep Beep (Get Off Your Ass And Dance). Ahhhh, 1991. Come back to me.

update 25 Sept: Just added the rest of the tracks. 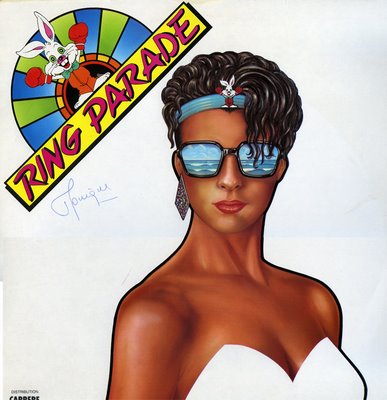 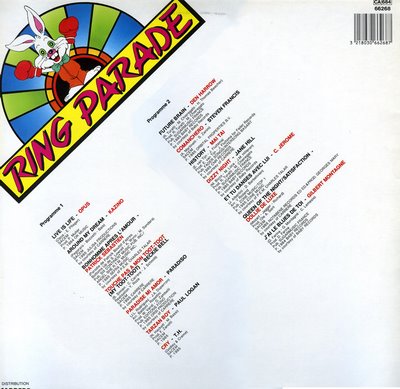 I found this in a second hand shop of some sort near Tarbes in the south of France last week while there on vacation with my girlfriend. It's too tragic in some ways to not post. This compilation perfectly illustrates my taste in music. Some of these tracks are on the edge of being very good and with a little editing or remixing could be extaordinary. But most of the compilation is just hilarious. I can't find any info about this album on the Internet, but it appears to be a compilation from label Carrere put out in 1985. There was apparently one released in 1984 as available on ebay here.

Probably the strangest and most amusing track on here is a mix of Satisfaction by the Stones and Mozart, sung by Dollie De Luxe, who was a Norwegian artist. Song originally released on 12" and album called Rock vs. Opera, and performed at Lincoln Center in NY in 1987, hilariously reviewed by the New York Times here producing the soul dwelling quote which is particularly appropo in most of the creative stuff coming out today, "It is a nice parlor game, but hardly a life's work." But then, if everything you do comes and goes in a millisecond, if the big act of this year is gone the next, is it really worth playing more than parlor games? And what's wrong with that, if people are just having fun.

Most of the rest of the stuff on this album is some form of italo disco. History by Mai Tai is quite good and so is Future Brain. There are some painful tracks as well. But my pain may be your pleasure. 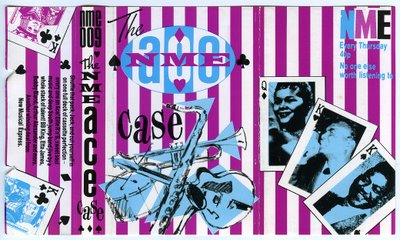 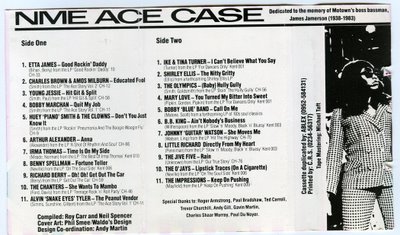 See, I love all types of music. While I am very much enjoying the early 90's stuff that is a good percentage of the tapes left in the Oxfam bin, there are always lots of other good things. This last week I also picked up some other good early jazz/rocknroll stuff and a great tape from Ivo Papasov & his Wedding Band which I may post in the future. Apparently this tape was released by NME and it's impossible to find for purchase. I particularly love the tracks Oh! Oh! Get Out the Car (by Richard Berry who also wrote "Louie Louie") and Good Rockin Daddy (by Etta James who also did "At Last"). And the Tina and Ike track is quite good. Enjoy.

All the kids who are loving a little speed disco check out this New York remake of a classic. All over yo face!! Like . . . what is on my face?

Cazwell - All Over Your Face (extended disco vocal mix)
Posted by dalston shopper at 12:26 pm 38 comments: