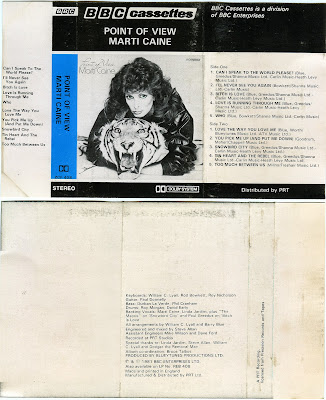 Sorry I have not posted in a while. Summertime and I've been travelling.

This last collection from the Dalston Oxfam was not super exciting. There were some kind of amusing tapes which weren't really exciting enough to post, like the soundtrack of Starlight Express, and some really excellent tapes which were not ironic enough for the spirit of this blog (but which I highly recommend), like the Selected Ambient Works II from Aphex Twin which doesn't have any written titles but includes the great track Blue Calx.

So I have chosen to feature Marti Caine who is primarily known for her acting work apparently and for hosting musical type shows on the BBC in the early 80s, such as the Marti Caine Show. But this very slick disco album was co-written by Barry Blue - I suspect the same guy that did Boogie Nights and I Eat Cannibals from Toto Coelo. Funnily enough - these tracks are slick and well produced but somehow not really enough to make them memorable. But for anyone looking for another catchy track to play in a dj set, these might fare. I think the best is probably the slightly reggae lite tune Snowbird City. 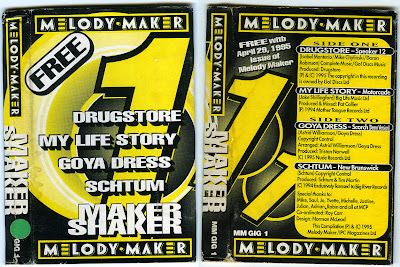 Fortunately, there was something remotely more critically interesting and rare in the tape bin this time, but it wasn't in great condition. This is a tape compilation released with the April 29, 1995 issue of Melody Maker.

Some of these songs are presumably not available for purchase even anywhere else. The Goya Dress and Schtum tracks are not listed on discogs at least. Drugstore's track with Radiohead dude Thom Yorke may be their best known (El President) but I'm not sure I'm liking it better than this earlier track. The My Life Story Motorcade track is pretty catchy, but still not really my favorite cup of tea. My Life Story was apparently started primarily by Jake Shillingford whose most recent band is Exileinside. I'm not sure the new band sound is pushing any new limits, but the track Butterfly Wings is quite pretty. Anyone can feel free to explain to me the whole appeal of this genre - I just bring you what's in the tape bin :)

Side one
Drugstore - Speaker 12
My Life Story - Motorcade