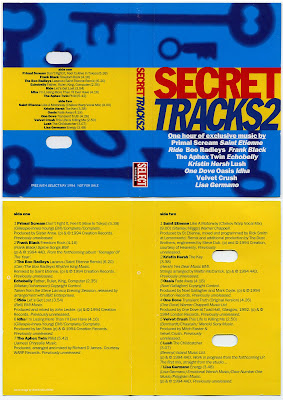 This comp was given to me by my friend James Price who is my friend because he's very funny and a nice guy, but who is also the hot new vid director. Damn, he's directed the good new songs from Simian Mobile Disco, Shit Disco and Lost Penguin (playing at Durrr on Monday, by the way). So he knew that his E27 postcode East London zone was where the good cassettes were from so he got me . . . a 1994 comp with Oasis on it. Yeah, that's some rare shit;)

Anyway, so truth be said this is one of the eras and genres of music that I know the least about. I was not into this music when it first came out. But I do like the Lush track and I know that Primal Screen, Aphex Twin and The Dust Brothers (aka Chemical Brothers) are marquee names. Enjoy.

A1 Primal Scream Don't Fight It, Feel It (Alive in Tokyo)
A2 Frank Black Freedom Rock
A3 The Boo Radleys Lazarus (Saint Etienne Remix)
A4 Echobelly Father, Ruler, King, Computer
A5 Ride Let's Get Lost
A6 Idha I'm Losing More Than I'll Ever Have
A7 Aphex Twin Phlid

Plus something new. Now that I'm a big blogger man, this band sent me some of their songs. I know nothing about Sir Salvatore other than that their songs are catchy in a Strokes kind of way. But now and then you need a good fun tune to listen to. Their myspace says they do Zouk Zouk Zouk. If only . . .

But only in London
is a pop man
often a contrarian.

I used to have this tape, unfortunately I left a bag of tapes behind when I was moving house once & I'm sure this was one of them! Kristen Hersh was in Throwing Muses, One Dove were a Scottish band, kind of a project for Andrew Weatherall, he produced them and did loads of remixes, I've got most of them, I'll have to dig them out - not listened to them for ages...

This was one of the better freebie tapes that came with all those 90s music mags that have subsequently bitten the dust. One Dove were great - featuring Dot Allison who's got a really good new record out.
Would be good if could get at the second side tracks....

i used to *love* that tape. especially that Oasis-song. they released it a couple of times in various acoustic versions, but it was never as good as this one...

I loved this old tape ta for this.

Quite to the contrary, Mr. anonymous Alphajerk. There are more than one Dust Brothers, and one of them is the old pseudonym for the Chemical Brothers. As can be verified here :)

yo! greetings mate .. cheers for saying big-ups at my place & leading me towards your lovely corner of t'web (dunno how i've not stumbled here before mind) .. consider yourself goddam linked to sire! (really, i need to check all my music links, most probably don't work no more, or don't deserve linking to! lol)
... as for this tape .. i got it too, but hell, seeing as you've been so kind as to rip it, i'll grab & enjoy ;)
... how do you go about ripping your cassettes - i tried it a while back, but couldn't get the sound right & ended up recording to minidisc & ripping that through my usb turntable! .. worked pretty fine as far as i remember, but was time-consuming .. suppose i better go try it again now you've made me think 'bout it (or have i made me think 'bout it?) .. i have shedloads of tapes i wanna share with folks!

right, ramble over, can smell the aroma of food ready to be enjoyed

I think that cassette is the only place to find that Aphex track... if I remember rightly. Hence it's pretty sought after...

I used to fucking love this tape. Nice one for putting it up

I agree with all the above praise for this tape. My pal gave me his copy in 1996 as he said I listened to shite indie music and wanted to educate me better! I absolutely adored it, and listened to it non stop whilst on my gap year in France, so it brings back lots of good memories. I managed to lose the tape but not the inlay card in one of my many moves as a student so I'm SO pleased I can get all those lovely songs back into my life as searches on Napster were leaving me with nowt!

PS from little miss anonymous from the above post.

This tape also led me to seek out other tracks by the artists involved, that's what I love about free compilation tapes.

Other good ones to look out for are the Big Issue 5th and 7th Birthday CDs (maybe just Scottish ones). Never got the 6th but I'm sure it's damn fine too!

Again, St Etienne, Primal Scream and Oasis feature, as well as Whale, who are just so odd they're super cool in my eyes, Gomez, Elizabeth Fraser and Super Furry Animals amongst others.

Select was the greastest magazine ever, for about three years in the mid nineties. I used to have this tape, and loved, in particular, the St Etienne and Aphex tracks. I rememebr they did a comedy tape (Planet of the Japes, I think. Ahahahahahaha!) with two Bill Hicks sketches on it, and another tape, maybe Secret Tracks1, with an incredible Orbital track live at Glastonbury.

I compiled this tape when I was editing Select and I'm really glad it's so fondly remembered by everyone here. It is indeed the only place where you can get that Aphex track, and the Oasis track too which has been airbrushed out of the official histories - NME wouldn't mention it in their "complete" discographies because we were published by EMAP, and Q was above that sort of thing. Thanks for saving me the trouble of digging it out and ripping it. You've made an old man very happy. Oh and if it's quality free CDs you're after, Dalston Oxfam always has a few old WORD magazine CDs... - All the best, ANDREW HARRISON

i still lhave this tape! thanks so much for posting it. i loved select!!!

The Idha track "I'm Losing More Than I'll Ever Have" was apparently unrelesed anywhere else. More info here:
http://www.popboy.net-angels.co.uk/angels/artists/idhaovelius.htm

And BTW, it was originally done by Primal Scream.

All Aphex Twin should consider themselves lucky now. This track is indeed only to be found on this tape, and I believe this is the first time this track is posted on the internet. Found this site via hypem.com

You've just left me feeling very old, but also very, very happy. This tape is like a duvet I'm going to wrap myself up in when I've have a shite day.

It was actually one of the better freebies out there at the time. Fade Away was probably one of the best tracks Oasis ever done, and I always had a soft spot for the Echobelly track.

I picked up this tape (with the magazine) during a layover in London on my way to Africa. I wore the thing out I played it so much (as did my friends who borrowed it from me). Thanks very much for posting these songs digitally. You made my night.

Oh My god!!!! i dunno how to thanks! I am now live in China, if you want some chinese songs , just say. And I go back to my hometown in Thailand often so if you need some thai theme , jus sai. Thanks a looot that fulfill my hope to meet "childcatcher" i have got the secret tape in 1991 and some uni senior borrowed me and lost himself with my tape. sooo let me do something to tha nks. hope 2 hear from you.

Hey, thanks for posting! Great tape. I remember the comments from all the bands on their arious tracks and can sort of remember them when I listen...Lush going on about gross old men, Dot Allison saying about how the track was meant to illustrate that time when you're in love and think a feeling is going to last forever and is the truth. Velvet crush talking about depression...

THANKYOU! I've been looking for versions of all these tracks on albums and things - and here they are all in one place! Inspired blog .. love it!

Thanks So Much For Posting This!!! Whoever/however you converted or obtained these tracks to mp3 is brilliant! I loved this tape so much while driving in my car with then tape deck but never able to listen since.

Great stuff! I don't suppose you've got the first Secret Tracks tape have you? I'm after that and Maximum Bliss - I can't find Gen 11's 'Immorta' anywhere else...

Thanks so much for posting these tracks mate. I have this tape at home in the UK *somewhere* but have never managed to find it. This came out just as i passed my driving test so it was played constantly in the car. Brings back some great memories...1994 - awesome year!

Thanx for posting this, great mix tape, came out Early '94 I think. Someone pilfered mine in '99, but I found a copy in a bag of tapes that were being chucked out by a mate, woohoo! Thankyou Andrew Harrison : ) x

This version of Transient Truth is the best--sadly, it can't be found elsewhere. I have the casette, but thanks for saving me the bother of ripping it.

Wonderful - I went through all your tapes to see if you had Secret Tracks, as I have only found half of that one.

Wayback Machine, incidentally, works - if you're patient and can take time to figure it out. So thankyou for saving these!

Any chance of reup?