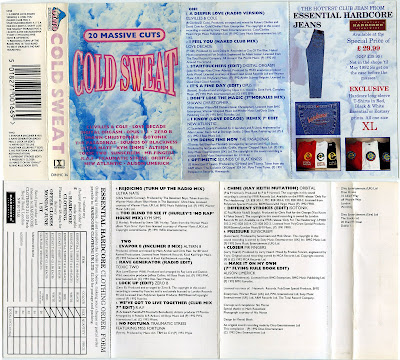 I will not deny it. This is some of my favorite music. I remember when some of this first came out and I just think it's some of the best music to dance to. Totally reminds me of New York. To some it may be overplayed, but oh well.

Trivia: Clivillés & Cole are C+C Music Factory, and are both Americans. It's a Fine Day was a cover of the song by the same name, a beautiful mellow folky number, by Jane and Barton released on Cherry Red records. Cameron Saunders, who was part of one hit wonder New Atlantic is now part of the quite good The Young Punx, who do mashup style stuff (sample it here) and will be playing at Glastonbury.

But face it, Side 2 is much cooler than Side 1. My favorite on this whole cassette is the No Fortuna. But the Orbital - Chime track is also very good. It appears there is almost no information about the No Fortuna - Traumatic Stress band or Miss Fortuna, but it looks like this track featured almost only in this compilation. The sample used in the track is "O Fortuna" from Carmina Burana which first came to life musically from Carl Orff in the mid-30's and has been HEAVILY used in various pop culture as you can see here, including 6 different rave-era songs (such as the more famous Apotheosis track in my blog here), the movie Excalibur, the band Ministry, the evil puppy on the Conan O'Brien show, Ozzy Ozbourne, as warm up for numerous sport events, including the Norwegian football team Lillestrøm, and in the opening of the movie Jackass. A special treat goes to anyone who sends me the new Trans-Siberian Orchestra version of the song.

Posted by dalston shopper at 11:49 am

Thanks for this as always!

Yes this is the music i listened to way back in the day.....i didn't think Dino music did such cool releases......thanks.....top work

Nice find! I've got this on vinyl and although there's some great tracks on there (Lock Up is a classic, and surely everyone loves Too Blind To See It!), they've pressed all 20 tracks onto one record, which makes it really quiet and crappy sounding. It really needed to be a double LP.

Or they could just have been a bit more selective with the tunes they included... The Pasadenas?!? - WTF?

Great stuff! I especially like the offer for "Essential Hardcore Jeans" on the tape inlay. I'd like to think there are still a few pairs floating around London somewhere. Thanks for the blog feedback, by the way, it was very much appreciated. And don't worry, the Urlaubshits compilation will be posted in its entirety over the course of the next few months, at the rate of one a week or so, just to get some mileage out of it.

Wow, I;ve been trying to remember who that Deeper love track was by for ageeees! Great site =)

I remember seeing the video clip to "Too Blind to See It" it was flogged to death on Channel 10 (Australia) "Video Hits" back in the day. Was also a top ten (might be #1) on the US charts.

beastly tune nice one for returning some long forgotton memories

KYM SIMS of 'Too Blind to See It' fame is back with a NEW track called "Good Morning." Available at: http://www.cdbaby.com/cd/kymsims2

Check out her new single and be sure to visit her website and show your support. Thanks!