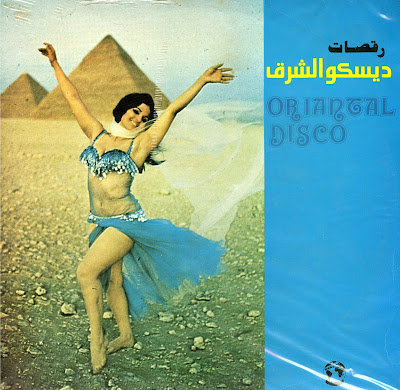 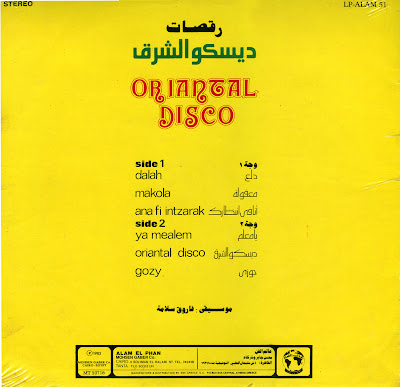 I was loaned a batch of amazing african records by my friends Polly and Antony under the condition that I put some of them on the blog.  Unfortunately I have been slack at posting them.  But I finally went through and found an amazing 12" of Shakara with Fela Kuti and a fantastic LP from Yaka Lokito which I can't further identify.  I will put these up soon.  But firstly I was drawn to this great cover of Egyptian pop-ish  music from 1983.  It's not really western disco at all.  But I know nothing about this album or the artist.   The arabic on the cover translates as "rakasat" which means "dances" and "disco al sharq" which means means "disco of the orient".
Side 2
Ya Mealem
Oriantal Disco
Gozy
Posted by dalston shopper at 5:28 pm 2 comments: Links to this post

I just also want to add quickly that I saw New Yoga perform recently and they were very good.  Hounds of Hate and their crew are really pushing the edge in the parties they are putting together and the crowds are getting better and better.  The music is quite experimental if you actually go down and listen.  It's not obvious or banging, it's layered synth fabrics.
Posted by dalston shopper at 5:54 pm 1 comment: Links to this post 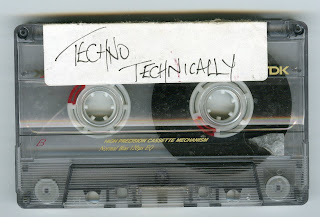 This is a tape given to me by Yasmina Dexter of Pandora's Jukebox dj and blog fame.  It is put together by part of the musical group Dubolition, Nick Watts.  It is a collection of very hard to find sort of techno/trance/acid from the mid 90s.  I can't say much about it other than that Nick was very kind to offer me a playlist of side 2 with as many tracks as he could remember.  I managed to identify a track from side 1 as well.  So there are a few individual tracks in low quality to download and then the full mixtapes.  I really like side 2. 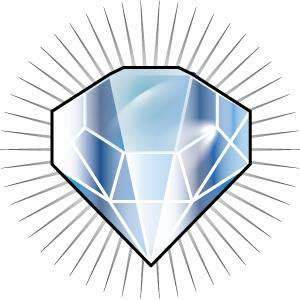 My friend Mario used to be in a band called Captain back in like 2005.  We used to see each around a lot, djing, maxin', relaxin', and generally trying to show our love of music.  Then he started doing the Pearl Flash synth disco concept party with this dope dude called Ben who I first heard dj at a great warehouse party in Shoreditch in like . . . 2005.  He was very serious, but had some arpeggiating synth knowledge for sure.  Anyway, Pearl Flash went on from from joy to joy and I dj'd with them now and then and I could see it was growing like a nasty poisonous mushroom under the floorboards into a full blown magnificent wonder angel of parties.

Meanwhile in 2009 Mario started to chat me up about his new band Luxury Living and I was generally like, smile, smile, pretend like it will be good.  I kept telling him to tell me when it was going.  So finally this last Saturday I went to see them play.  And it turns out I was LATE.  They had already been playing around town and lots of other people already loved them a lot.  And they were REALLY good.  Even my girlfriend loved them and she doesn't even really drink.  They only really have demos so far but this will give you an idea.  I personally prefer this epic disco stuff than the stuff that is probably more mainstream to the pop world right now like Everything Will be Amazing.  What they're good at is phrasing - songs have to go somewhere, up and down, etc., in the right places at the right time to keep you hooked.  Have a listen.

And I am djing for a new party called Fancy done by the Pearl Flash kids for the first time at Bungalow 8 next week, the 17th of March.

Kimberley (demo) - Luxury Living
Posted by dalston shopper at 9:41 pm No comments: Links to this post