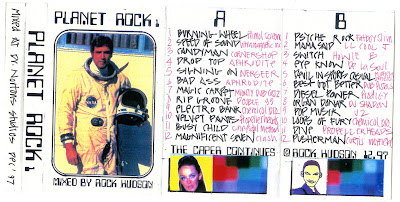 Finally emerging from an African cave where my musical ear has been for the last two months. I bought this fresh cassette a few months back at a car boot sale in Dalston from a guy called Paddy Austin.  He told me these were some of his favs for auto cruisin and I would need to return what I didn't use. Here's to you, Paddy, cause the first one reminded me of some of the great tracks that were out in 97, things like Aphrodite, Cornershop, Primal Scream, Fatboy Slim, and Propellerheads.  I so much love the Aphrodite - Bad Ass track that I dropped it at my dj set at Catch in Shoreditch last thursday - and the crowd asked for more!

Planet Rock 1 - Side B (download)
Bad Ass - Mickey Finn & Aphrodite
I also want to mention a lot of other things that I like right now, things I've seen recently, and things that are coming up.
DJ GIGS
I'm djing at the Land of Kings festival on 17th of April.  Lots of good djs/bands at the festival so check the lineup - Kathy Diamond, Rory Phillips, Lou and Nova, An Experiment on a Bird in the Air Pump, Allez Allez and others.  Then the following Tuesday I'm also djing at the 6th birthday party of the Liar's Club in Nottingham with Health (live) and Banjo Freakout playing.  I hear they get their freak on in Nottingham, so I'm waiting to see.
NEW BANDS
I'm also creamed to the brim at randomly meeting two new musical projects in my neighborhood (that would be Hackney, creative center of the universe) that I really like.  One is ColouringIn (which sounds a lot like Empire of the Sun, which is totally the sound of now and my tip for the BBC Sound of 2009).  ColouringIn is "Love Minus Zero head honcho Tom Neville and opera singing former student of the Royal Academy turned electronic-upstart Henry Bennett" (plus a few others I think, such as my friend Marnie Hollande).  In other words, beautiful music with a fab operatic voice.  They've let me post a track below and I'm sure the record labels are panting.
Intergalactic Romantic (demo radio edit) - ColouringIn
The other band is a new project by uber mad synth fan neighbor Stan.  We hang out now and then and he just popped up the idea that he's working on some music last week and I was like "oh my god, here we go again, some lame ass project I'm going to have to be nice about but ignore".  But the music is beautiful and fantastic.  It's not a dance floor piece, more like a catwalk piece, or something to play in the background when you're working in your fashion studio not getting paid but filling your resume and lightly tapping your foot along.  Reminds me of that LCD Soundsystem track that was big - Someone Great.
Tumble Down Slow - Hounds of Hate
ART/OTHER THINGS
First of all, you have to check out this hilarious project Dollar Van Demos that someone sent me by e-mail (it's on youtube).  It's basically a taxi mixed with new artist shows.  The taxi is cheap and you get to check out some new artists.  Notice how different the vibe is in Brooklyn than in London.  Go Sally Connors.


I also saw some art I really liked at the Perrotin gallery in Paris a few weeks ago and as I'm increasingly interested in how undeveloped my taste in art is, I thought I would post some of my favorites so people can tell me why I have bad taste.  I really like Tatiana Trouve, and particularly this piece.  I also really like Jose Levy's show that was at Perrotin's gallery, but I guess he comes from fashion and it's not called "art" but rather "design" on the web page.  humph!  The chessboard of little mice he made was really great.  Finally, my fiance and I have been fans for some time of Rosa Loy, so now you know what I want for my Easter present.  I think it's because I'm somewhat drawn to the slight fairytale imagery, particularly stuff like this.
That's all for now.
Posted by dalston shopper at 7:33 pm

Please don't completely leave the African cave! Your blog is a great resource for the amazing music from the dark continent. Apurva

Been on the prowl for a throwback bigbeat mixtape