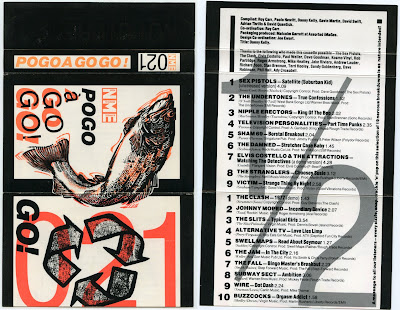 I am reposting this blog post from 2009 because it was offline for a while and has a lot of tracks that are rare and sought after.

A1 Sex Pistols - Satellite (Suburban Kid) (unreleased version)
A2 Undertones - True Confessions
A3 Nipple Erectors - King Of The Bop
A4 Television Personalities - Part Time Punks
A5 Sham 69 - Borstal Breakout
A6 The Damned - Stretcher Case Baby
A7 Elvis Costello & the Attractions - Watching The Detectives
A8 The Stranglers - Choosey Susie
A9 Victim - Strange Thing By Night
B1 The Clash - 1977 (demo)
B2 Johnny Moped - Incendiary Device
B3 Slits - Typical Girls
B4 Alternative TV - Love Lies Limp
B5 Swell Maps - Read About Seymour
B6 The Jam - In The City
B7 The Fall - Bingo Master's Breakout
B8 Subway Sect - Ambition
B9 Wire - Dot Dash
B10 Buzzcocks - Orgasm Addict
Posted by dalston shopper at 4:54 pm

great! thanks for sharing!!!
i will post the costello song very soon...

Ha. I already left a comment on your earlier post, not realizing u reposted this. Its a great post, and its nice to see that this tape won't be lost to posterity. Thank u so much for posting this tape!!