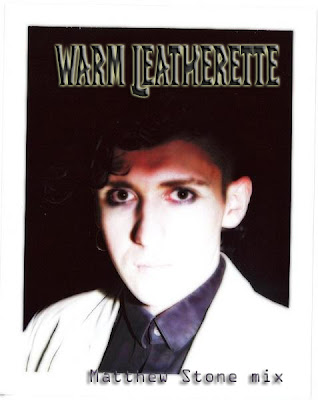 My friend Matthew Stone sent me a random  mix of Warm Leatherette by The Normal that was so good I decided to post it. I made the artwork to go with it cause he's too busy of an artist to make it himself :)

Matthew is a very special person.  In the years I've known him we have often dj'd together and I can say without question that when I do it is usually for some party so underground that there are sound system problems and no license or bar, and no one there that would see me play to hire me for real money - yet still somehow the very most fun I have ever have djing.  I think part of the reason for this is that we have similar taste and I enjoy playing stuff to try to impress  him and vice versa.   Matthew is also a rising art star - you can check out his ventures here.

He told me these are 2 of his favorite tracks right now.

And Chris Flatline's re-edit of Yazoo - Situation.  Youtube below.

Coincidentally, Warm Leatherette was on the only release ever put out by Daniel Miller [Edit: as the Normal] who founded Mute Records, and it's still one of the most amazing tracks ever.  I've always been looking for similar stuff without much luck - maybe a little early Human League but that's about it.

the only thing ever released by daniel miller? what about all the silicon teens stuff?

Silicon Teens were all Daniel Miller - even Jackie and Diane. (best not go there)
T.V.O.D was the aa side to Warm Leatherette

Yo also have Robert Rental & The Normal live at West Runton Pavillion, as well as many collaborations with Thomas Fehlmann, Boyd Rice and so on.

Well I take solace in the fact that at least someone is reading this blog. Make one factual error and it's hell to pay!! OK, I read Wikipedia wrong - he only produced one release as The Normal. But surprised no one mentioned also his work as Duet Emmo with guys from the Wire.

Great track and amazing remix by Stone. If you want something similar..try with Dalek I or Crash Course in Science. x

One out of six comments mentions the actual track, that's the "blogsphere" (I hear thats what the young people call it) for you I guess. Though I must admit I too had "What about the Silicon Teens" surfacing from the useless trivia lobe of my cavernous brain.

As for the track itself, it's in the same league as the Grace Jones cover, both versions take the song and make it their own..I love how he loops and loops that classic "Wasp" synth sound (though I am sure I too am going to get leaped on and get told, "you're wrong in fact it was a Moog/Korg/EMS/Blah synth sound)..its great how it teases and teases before that seventies drum machine sound hits...pass on my praise to Matthew Stone and I will keep an I out for his name as I am sure he is going to do great things if this re-edit is anything to go by.

The link to the remix seems to be broken?