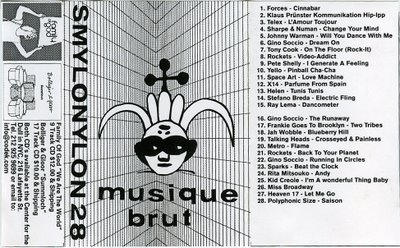 I found a ton of amazing tapes from the Dalston Oxfam Shop this weekend which I will post soon. But as I am just back in London I have decided to post another cassette which I probably should have posted already, my Smylonylon 28 compilation tape.

Back in the late 1990's in NYC, in the search for another good used piece of clothing, I wandered into the Center for the Dull on Lafayette street. The place was like a cave inside with used jeans piled everywhere and clothes hanging from the ceiling. What really struck me, though, was an amazing mix of songs playing in the background. I asked and they were selling mixtapes done by the owner called Smylonylon. The only ones I could buy at the time were numbers 27 and 28. Some of the songs sounded like they'd been slowed down almost beyond recognition to match the beat, but it worked like very little I've heard since. Somehow, I've lost number 27 and I've asked many people and never found any other tapes.

Here's a little info on the shop and Chris Brick who did the tapes with Alex Gloor of current group In Flagranti/Codek. Check out his new cd and videos here. He was also involved in the amazing Organic Grooves parties which used to take place in NYC. I think it's a shame that such great interesting mixes are not available somehow. And I've offered to anyone I've spoken to record any Smylonylon tapes into digital. Let me know if you have any more info on these guys or the tapes. NEW INFO!! The Downrightuptight blog is going to post a bunch more of the smylonylon tapes. Yeah!

- some new info: I've been told (though I can't independantly confirm) the following about X14 and Parfum from Spain - they were "a regular dance club staple . . . in Texas in the late 80's. . . . I certainly do remember hearing [them] when i'd go out in around 1987-89 while I was a student at university in Austin. My wife just reminded me that "parfume from spain" was part of the film soundtrack for John Hughes' "She's Having a Baby." it is not on the official released soundtrack, but is part of the theatrical release of the film, specifically the scene when Kevin Bacon's character is in the photo studio trying to wrangle a baby." This excellent info from this lovely sojourner on the web.

Here is the track listing:

Here are some tracks from the mix:

Posted by dalston shopper at 1:25 pm

Hey, I love this, I'll link you on my blog in a minute too. There's some great mutant/Italo disco on this one. I know nothing about the guys that made it, but just wanted to say how cool this was. I posted two tracks from a German New Wave tape on my blog a week back (click my name and go to the page). I'll check out the acid tape in a bit too and look forward to anymore posts!

this post is worth it just for the X14 song! thank you so much!

thanks for this and please, more smylonylon. i have several of the tapes (i bought all i could from the smylonylon/center for the dull store before chris brick stopped making them) but i don't have a tape deck anymore.

yo Ithcy, e-mail me at spamorder@postinbox.com. I only have one tape and I am trying to find more to record.

this is hilarious - i am both nostalgic and educated by this mixtapes - i didn't know about deep piano house!/and i lost my copy of monie in the middle. thank you!!

These tracks were all big in Montreal around the same time!

OMG, how long have I been trying to track down that X14 song? FOREVER. thank you!!!

Have lived in Amsterdam for the last 10 years but was briefly back in London; Dalston actually, I read about your treasure trove in some magazine article, & so proceeded to your blog - no time to visit the (no doubt smelly) Oxfam.

What gems ! Have thoroughly enjoyed rumaging in the labyrinth. You've both dusted off classics from my youth & introduced me to new soundz.

check: free.radio.wagadugu.org
you can get them all and much more!

thank you for posting this! i love this tape but i lost it years ago and i thought i would never hear it again. thank you!!!