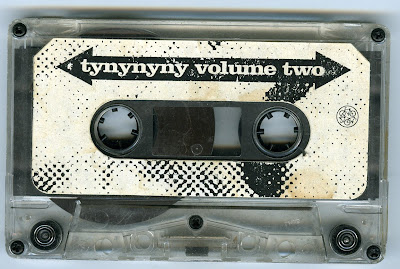 This is 60s pop, or as it is often described "spage age bachelor pad music". This came out around 95-96 done by the same guys that did Smylonylon (also now part of In Flagranti) and you can see a similar style in the early Smylonylon tape posted on the blog here. Around that time there was a big upswing in interest in 60s hipster parties, especially in NY and Hollywood, which also coincided with the release of the early Vince Vaughn movie Swingers. I moved to NY in 1996 and just caught the tale of this party scene where I met some of my best friends. Tynynyny was one of the parties and another was the 999999's which used to go on at Flamingo East in which Penelope Tuesdae, my very favorite friend Lasia, and DJ Fancy were involved (Dj Fancy later appeared as the genius behind fantastic girl group Fannypack). I also met Chris McClary there who since moved to Cali and is behind the great website See Spot Ride featuring dogs riding in cars.  There is even mention of this party in the mid 90s in the New York Times. This was originally unhip spage age according to this New York Times article and the music was often put together to demonstrate the technical capacities of new equipment that had just been released.

First track on side A is the intro to the german version of Sesame Street called Der, Die, Das, and I believe it originally came out on this album called "Sesamstraße - Der, Die, Das - Und Andere Lustige Lieder Und Lernspiele", in case anyone wants to send it to me.

But the most amazing 2 tracks appear in the middle of side A and I haven't been able to Shazam the names of the first one so any help would be appreciated. I've ripped them to listen to as individual tracks below. The second one is very well known Popcorn track by Hot Butter.

The first track on side B is the great Sunshower track linked below by the same band that did Cherchez Le Femme.I want to thank the very lovely fashion god Mel Ottenberg for sending me these and other cassettes. I will be featuring a rave cassette he sent me later in the week.

Side A track rip 2 (Popcorn by Hot Butter) Listen to 79 (yes 79) versions of the same song on WFMU here, including version by Prodigy, Kraftwerk and Aphex Twin. I like the Klaus Wunderlich version best.

from Side B - Dr. Buzzard's Original Savannah Band - Sunshower
Posted by dalston shopper at 9:58 pm

Track 2 is called Popcorn, got its own wikipedia page even: http://en.wikipedia.org/wiki/Popcorn_%28instrumental%29

Thanks for the tapes!

Thanks so much, Wo!

Good stuff... love returning to this flavor again and again... I'll have to share some of my tracks from this era next time I see you...

I am guessing this was at about the same time as a similar London scene with the likes of the Karminsky Experience, Count Indigo/Felchley B Hawkes and Martin Green DJing. Club Indigo at Madame JoJos was always fun - and as I recall the music was a mixture of the US Esquivel/Denny stuff and the UK Studio 2 Alan Hawkshaw etc studio guys.

They put out some great (and now out-of-print) compilations that I'm sure you know of - if not, drop me a line.

Der Die Das was recently played at the Bar 25 6th Birthday Party (the one with all the confetti) here in Berlin. Lots of Germans were singin along. Must be some kind of anthem I guess...