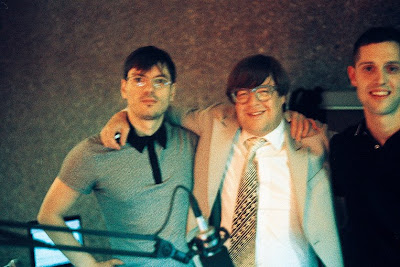 I got asked by Diesel U Music to do another live radio show last Saturday. This is a temporary radio station broadcasting live on 106.6 fm in Glasgow and on the Internet here. I felt because of the wave of disco crashing around me from this summer in London that I would try to feature some Doctorates of Disco so I got in Paolo of Tutto Matto and Super Disco Paolo as well as Dan Beaumont of the hit party Disco Bloodbath. They brought a few of their special records and we had a great time chatting. As a matter of fact that was the best part of the show - talking about their perceptions of disco's history and their current perception of music and the scene. Download link and tracklisting below.

In addition we have the following excitement coming up. On Friday I am hosting the basement room of the People On Horses party at 333 club in Shoreditch and we have the exciting bands of An Experiment on a Bird in the Air Pump and Maria & the Mirrors. I am quite excited about both of them. I saw Maria & the Mirrors when I was at Offset Festival and loved them and my friend Hanna of the P.I.X. magazine luckily put me on the trail of An Experiment on a Bird in the Air Pump. They have played recently with The Horrors and S.C.U.M. The bands have a them - both of them involve girls playing drums standing up. I'm big on themes because I think they show something - but it's for you and me to discuss what they show. I will also be djing as well as Suzanne of No Bra (and if you've never heard her dj, you're missing out).

And then on Saturday the 20th we have a our COME party again with Matthew Stone, Yasmine of Pandora's Jukebox and the lovely enigma Theo. No matter that I kept the location secret before, it still has turned into the hottest party of East London this summer. If you're on the scene, you probably know where it is, otherwise e-mail me.

Posted by dalston shopper at 11:14 pm

OH MY GOD I AM SO EXCITED ABOUT THAT PARTY...