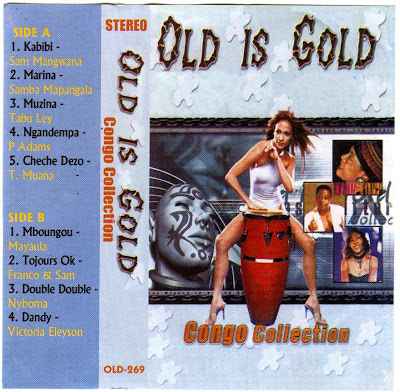 Well this is one more soukous cassette I brought back from Tanzania.  After this I'm going to go back to posting some other types of music but I will post more Tanzanian cassettes in the future.
This one is full of huge names and all of them have that dancey soukous sound I love.  I played a bunch of these at our Manifesto party last thursday night which was a smash pot of fun.   Thanks to those who came. We had more than 400 people in the Double Club that night and Taxi Pata Pata (Zong Zing in disguise) rocked it out.  Pictures here.  Fiston who plays in Taxi Pata Pata and Zong Zing told me that he used to play with Samba Mapangala, so you can get an idea of what it was like by listening to the tracks below.
Side A
Kabibi - Sam Mangwana
Marina - Samba Mapangala
Muzina - Tabu Ley
Ngandempa - P Adams
Cheche Dezo - T. Muana
Side B
Mboungou - Mayaula
Tojours Ok - Franco & Sam
Double Double - Nyboma
Dandy - Victoria Eleyson
Posted by dalston shopper at 4:13 pm

Thanks very much brother Tood. I'm delighted to hear these tracks. I come from Kenya, East Africa but I love Congolese music. I tell you that the people of of Central Africa and East Africa are brothers. You do well when you give us both kinds of music: Soukouss and Swahili Rumba.

Oops! Mistyped my Lingala. East Africa should be "Afrika ya Monyele" but maybe only the Congolese readers will have noticed. :)

I've just come back from two months in east Africa - I can't get enough of this stuff - more please. Asante sana.

Thanks for all this lovely soukouss...I can't get enough of the congolese sounds at the minute. Is there any chance you would link to my blog?
http://snapcrackleandpops.blogspot.com/
I'm posting all sorts of sounds from all around the world...mostly vinyl from charity shops, boot sales and flea markets.
Thanks for your time.

Would really like to get hold of these tracks!

Seems the links dont work, anyway i can get them?