I was contacted randomly by David from Memphis London, who seems to have the "collecting" bug like I do (as he noted when looking at my record collection, it seems that I collect mostly for the hell of it, not for the value of it:)). Memphis do a great business in hard to find amazing books and they have put together an exhibition at the Dover Street Market called "Opposition" about British alternative culture in the mid-late 1980's. They have some amazing NME mags from that time as well as gobs of other cultural detritus about the Smiths and other bands. They also have these amazing stereo amps made by Ron Arad from that time frame. And . . . they have a bunch of my cassettes from that era, most of which have featured on the blog. Pictures below. Exhibit will be open not for long so check it out. 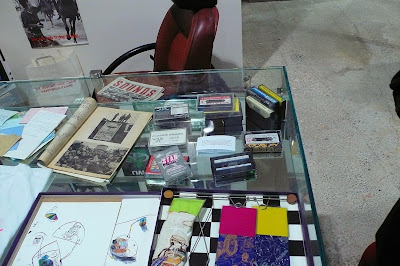 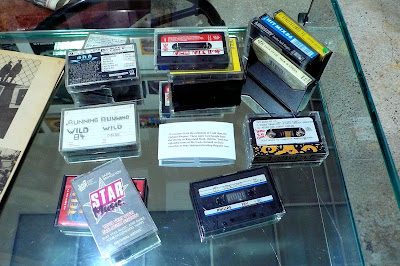 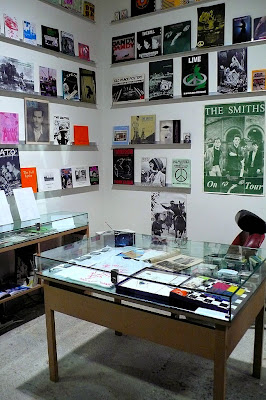 We also had an amazing time last weekend in Berlin doing an art/music thing with the !WOWOW! group. It's so cheap in Berlin and the quality of the life is so excellent, it just feels great to be there. We stayed at this amazing apartment/hotel which is furnished entirely with original 60s wallpaper and stuff from the former east berlin. After djing in Friday night at Maria am Ostbahnhof, we went to Picnic on Saturday night which was very excellent music/crowd. Pictures link here.

Posted by dalston shopper at 1:44 pm

ooh great to see someone else collected and saved away those Age of Chance cassette singles (top shelf material i see !)

Heh, well I've learned something today: have to say I was initially somewhat confused by the mention of Ron Arad, but now I realise you weren't talking about the missing Israeli pilot...

I actually had never heard of Arad the pilot, but ironically enough Ron Arad the designer also studied in Israel - at the Jerusalem Academy of Art. More info on the pilot here:

Where was the place you stayed, and what was it called please?

The Ostel. It's a hostel/hotel type place full of furniture/wallpaper that is original vintage stuff from 60s east germany. They have regular rooms and also a bunch of full flats which you can rent. The pictures are from one of the flats. More info here: