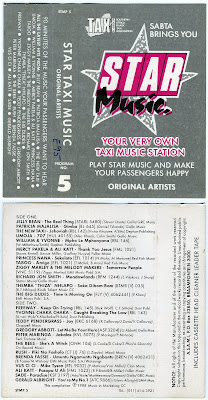 I previously posted no. 3 of this series here but I had bought both together and thought I would put this one up as no. 3 got a great response. This one is also from 1988. It's a bit of a novelty value as there are not many great tracks here. It seems the south africans on this comp were trying pretty hard to use their 80's synths and imitate some synth pop from the west. But there is a unique african vibe to each of the songs, though they all do sound quite similar. Best song on side 1 is probably Taboo - Amigo, in my opinion. But of course, it's the interludes that are hilarious here. The no. 3 cassette was featured on bbc radio for that reason.

YEAH!!! BEEN WAITING FOR THIS ONE! THANKS!

you guys are divine!!!

William said...
This comment has been removed by the author.
2:22 pm

This is knocking me out. So booming.

Is side 2 still coming up?

Hopefully I can get around to it soon.