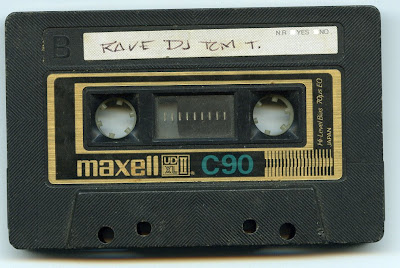 Another excellent rave tape made by the unknown DJ Tom T in the early 90s. This was sent to me by Mel who sent me the Tynynyny tape from the previous blog post. He told me he collected this from the early 90s in the Washington DC area but that's about all the info I have. Any tips would be encouraged about Tom T or the tracks. There is one track in particular that I have ripped out from the middle of side A that is really stand out. I'd love to find the whole track.

Track ripped from Side A

Also I want to direct your attention to a genuine new talent. Hounds of Hate (my Hackney neighbor Stan) has produced a complete mixtape which you can buy (says it's sold out). The tape is a collab with Hype Williams. Once again, first featured on this blog, now featured on the NME. In my opinion, his standout track so far is Phantasy Re-Up featured on No Pain in Pop.

Posted by dalston shopper at 11:09 am

And this turned up recently on FACT magazine:

I have to say Thistle I like the overview, but as someone who only sees it from now I still prefer the Belgian stuff on this tape.

track 1 on side A is called "Just a Feeling" by Terrorize.
great post btw!

The mystery tune sample you posted is a remix of "YOU GOT HER KEEP ON PUSHING HARDER" by Dux Dux.

does anyone know what the second tune on side A is?