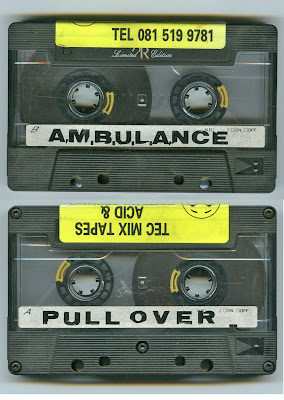 This is probably my favorite cassette I've posted on the blog right now.  It's such the sound I'm looking for.  I feel like disco is starting to get overplayed and  there are rarely new discoveries that are amazing that I don't know.  Electro bangers are fine, but that's been going on for a while now.  Pop-synth stuff is great, but there are few and far between tracks that are great.  So 1992 Belgian techno acid just sounds so fresh to me.  I am not as crazy about the big hardcore sound right now that I've previously posted on here, things like James Brown is Dead, etc.
I found this cassette in a thrift shop behind Hackney Central.  The Pullover side appears to be almost a duplicate of side 2 of the Serious Beats 4 cassette.  But I can't identify the tracks on the a.m.b.u.l.a.n.c.e. side so any track id tips would be lovely.
a.m.b.u.l.a.n.c.e. side (sharebee)
sample track from a.m.b.u.l.a.n.c.e. side ("I wanna be your finger")
Pullover side (sharebee)
(listen Pullover side streaming below)
Here are a few tracks from the PULLOVER side.  They are slightly different versions than in the  mix.
Speedy J - Something For Your Mind
DHS - House of God (Unholy version)
I also want to hype the UK Soundclash ipod competition coming up this Tuesday, the 9th. I've been invited to compete in a team with Matthew Stone.  Lots of other good djs competing with us such as Crookers, Girlcore, Nova and others.  I  think Matthew and I will go for the conceptual vote.  It's all about the popularity though so come down and scream for us to win.  Winners are measured by the loudness of the crowd.  Tickets here.

Posted by dalston shopper at 7:01 pm

YESSSSSS! This is indeed the quintessential early 90s techno sound. Best EVER! Love it. Thank you SO much for posting this.

Please check our site. If you like our work, do link back to us.

A lot of thanks.

PS : you can also check our other website http://www.radiovideojazz.com/

Hi! Great post.
If you're into the DHS-sound, you should definitely check the swedish group Frak on Börft Records.

Oh hell yes! Give us more of this, sir. Top notch!

Classic Hawtin track at 3:26 on the Ambulance side (as FUSE - "Substance Abuse" from Dimension Intrusion)... oh how I wish Richie would rock the 303 again. Overdose! Overdose!

Nice tape. I'm afraid the only tune I can spot for sure on the A.M.B.U.L.A.N.C.E side (other than Substance Abuse which we already got) is the very last track at 44.26 - it's Transformer 2's "Pacific Symphony" - absolutely wicked track - shame it cuts off here.

I suspect that the first proper track (from about 0.25) could possibly be a version of Robert Armani's "Ambulance", hence the title of the tape, although I don't really know that tune and the version on YouTube isn't all that similar...

I notice that both Ambulance and Pacific Symphony are included on that Serios Beats Vol.4, so it looks like both sides of this tape might possibly be a compilation made up from there?

Is it just me or does the lyric "I wanna be your finger" slightly creep you out?