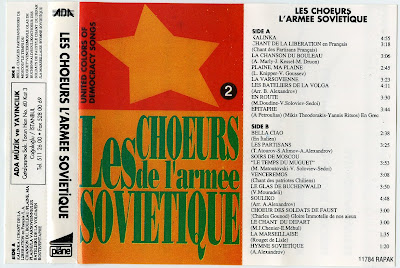 I don't have much to say about this other than I really like this soviet army choir singing these military themes. Hope you enjoy. Weird that it's from Turkey? I wish this cassette had this alternate cover which I found on the nets. 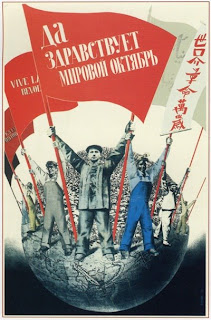 LES CHOEURS DE L'ARMEE SOVIETIQUE
DIRECTION: BORIS ALEXANDROV
SIDE A
1 KALINKA
2 CHANT DE LA LIBERATION (Chant des Partisans francais) (A. Marly-J. Kessel-M. Druon)
3 LA CHANSON DU BOULEAU
4 PLAINE, MA PLAINE (L. Knipper-V. Goussev)
5 LA VARSOVIENN
6 LES BATELIERS DE LA VOLGA (arr. B. Alexandrov)
7 EN ROUTE (M. Doudine-V. Soloviev-Sedoi)
8 EPITAPHE (Mikis Theodorakis-Yannis Ritsos)
SIDE B
9 BELLA CIAO
10 LES PARTISANS (T. Atourov-S. Alimov-A. Alexandrov)
11 SOIRS DE MOSCOU "LE TEMPS DU MUGUET" (M. Matousovski-V. Soloviev-Sedoi)
12 VENCEREMOS
13 LE GLAS DE BUCHENWALD (V. Mouradeli)
14 SOULIKO (arr. A. Alexandrov)
15 CHOEUR DES SOLDATS DE FAUST "Gloire immortelle de nos aieux" (Charles Gounod)
16 LE CHANT DU DEPART (M. J. Chenier-E. Mehul)
17 LA MARSEILLAISE (Rouget de Lisle)
18 HYMNE SOVIETIQUE (A. Alexandrov)
Also, head over to the Durrr party site to download a new podcast I did in early April for the party. I really like this one, featuring lots of the tracks which I dj currently, as well as some unusual ones like the elevator music track Wives and Lovers at the start, the track from the new Chap album and Ata Kak african track which is hypnotic and hilarious.
Finally, if there is anything that I am all about, it's showing the other side of something we know well. Looking at hidden layers forgotten and showing how the past not only endlessly repeats itself, but also forgets nuances that are really fantastic. That's sort of the manifesto for the blog actually. And in that spirit, I picked up this tape on ebay from Princess Julia who has been glitterati of the demimonde in London for years. She is now (with the lovely Hanna Hanra) behind the very well connected and informed The P.I.X. magazine which is your ultimate source for all that is really new and hot in music. I don't know much about Milky Lunch, or the tracklisting for this, but it's bouncy progressive housey stuff from 1994. Enjoy. 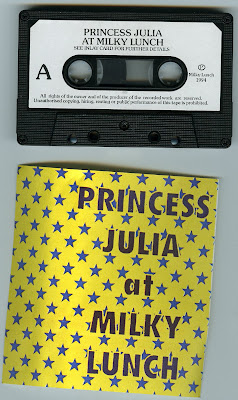 Princess Julia at Milky Lunch
Side A (alternative zshare link)
Side B
Posted by dalston shopper at 1:37 pm

Crazy, I just picked this up at a flea market in Paris 2 weeks ago. Mine was recorded in France though, in 1962. Different songs.

I just discovered this blog today and I'm floored! This is great! And when I lived on Navarino Rd (right down the street), I use to go to this Oxfam at least once a week. This has made my night!

track 6 on the russian tape is a broken link... you've got an extra space in there.

i love you todd! *throws panties*

Nice one! Picked up Kalinika off of soulseek by chance a couple of months ago. The Red Army Choir are the fucking best.