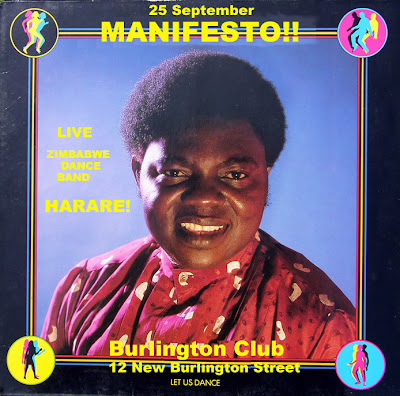 This Tuesday we are doing our monthly african party - back again after taking August off. And we have Harare, a live dance band from Zimbabwe. For those that have not checked out the party yet, I think there is a very interesting trend of fantastic sort of indie-ish bands that are incorporating african type guitar sounds and rhythms to take a genre that is maybe a bit bored and make it even more poppy and dance-able. Add to that the recent kuduro trend mixing in african type house-ish beats and you have a bunch of great new african influence music coming out right now that is not very high profile but which can make for a great party. This is behind what we are doing with Manifesto and why it has been packed very time.

One of the bands that I've been most excited about in the last week is Extra Golden, which I discovered on the amazing Benn Loxo du Taccu blog. You can download some of their songs and read an article about the mix of American rock and Kenyan "benga" pop that is taking place there. Their new album is coming out on ThrillJockey called Hera Ma Nono. I played their track Ok-Oyot System at Durrr last Monday and I kid you not, if there had not been a bit of the heavy african vocal, it would have sounded right at home as a fantastic guitar led indie track. The kids loved it.

In addition, uber-cool swedish/french duo Radioclit have been doing kuduro style mixes for some time now and recently did a remix of The Little Ones - Pot A Brewin which you can find on itunes and purchase at the push of a button. They are also producing genuine artist Esau Mwamwaya from Malawi and I can't wait to hear more of that stuff. You can read an interview with them about their interest in all good things in this weeks (September 19) issue of Timeout, page 126.

Come down on Tuesday and check it all out!
Posted by dalston shopper at 12:33 pm